Here at abelard.org, we take a lot of photographs. Many of them are pretty or interesting. This is the fourteenth in a regular “photograph with little or no explanation or comment” feature.

Senganen - known as Iso Gardens, or Iso-teien, to the foreigners - is located just outside Kagoshima City, on the road to Kirishima. The Senganen villa was built in 1658 by Shimadzu Mitsuhisa. The Shimadzu clan had been given the Satsuma, Oosumi and Hyuga areas of southern Kyushu (modern Kagoshima prefecture plus a little bit) to rule by Shogun Minamoto-no-Yoritomo in the late 12th century. In the Edo era (17th century), the Shimadzu also gained control of the Ryuukyuu kingdom (now Okinawa).

In fact, despite Japan being nominally united as one country, the Shimadzu clan managed to create a largely independent kingdom in the south - too remote to be fully controlled by the Shoguns. At this time, the Shoguns tried to stop anyone coming in or out of the country, using death threats and creating an artificial island in Nagasaki harbour (Dejima Island) for the foreigners to stay on). Meanwhile, following a gunship bombardment by annoyed Brits, the Shimadzu clan sent eighteen promising teenagers (and one interpreter) off to England to be educated. A little later Perry’s “black ships” forced Japan’s Shogun to open the country, by sitting menacingly in Tokyo habour. The Kagoshima students returned and were instrumental in Japan’s transformation into a modern industrial country (that transformation is known as the Meiji Restoration).

The Senganen villa and gardens are now a well-kept tourist site. From the gardens you can clearly see the sea and the active volcano (Sakurajima) out in the bay, as well as the city of Kagoshima stretching off round the bay to the south. For such a small place, entrance is quite expensive at 1000yen (about five pounds) for adults - half that for children. There are also a load of shops selling some very good bits of local glass and pottery for far too much. Normally Japanese historical sites are amazingly cheap - 200yen (about one pound) is not unusual.

Prices aside, I think the place is worth a visit for anyone visiting Japan that far south. The best time to visit is probably late March/early April when all the cherry and plum blossoms are in full display, but be aware that there will consequently be more people around, and that there are things worth seeing in the gardens all year round. The pond below is full of huge Koi carp of myriad colours. 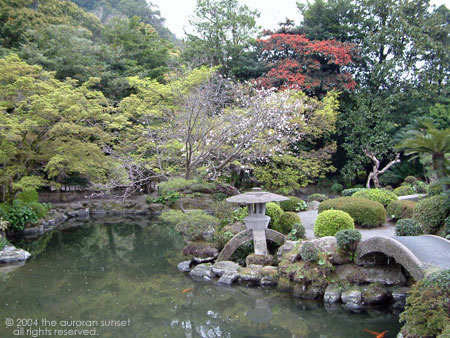 Here is a Ryuukyuu dragon on the roof of one of the villa buildings. These distinctive dragons are specific to the Okinawan islands, which the Shimadzu lords ruled over for a few centuries: 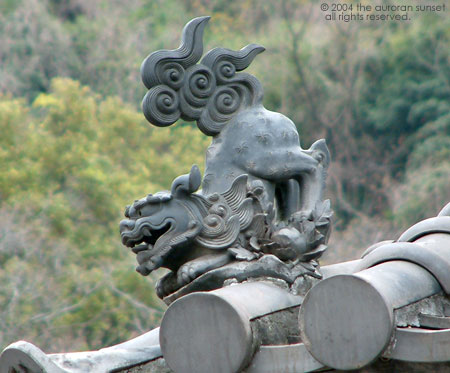 The day I went, it was overcast and drizzling. This gave the advantage of having the place more to myself. It also makes for pretty pictures of wet flowers: 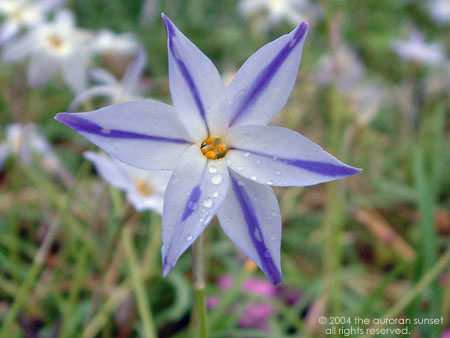 This is one of the many varieties of cherry blossom, this one is called “gantan-zakura”: 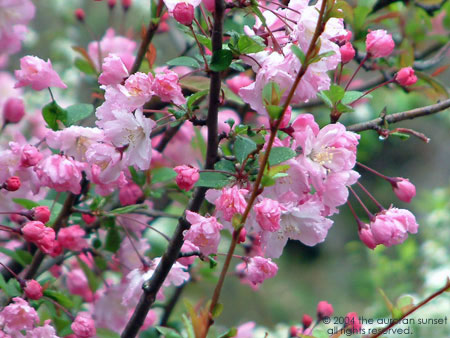 Here I am looking out over a different part of the garden towards the sea - you can just about see it (and a ship) in the background. The stone sculture has a very weather-worn Ryuukyuu dragon on the top. 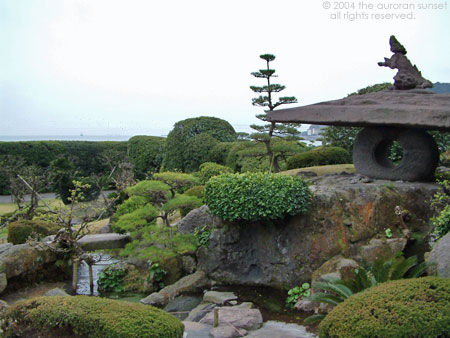 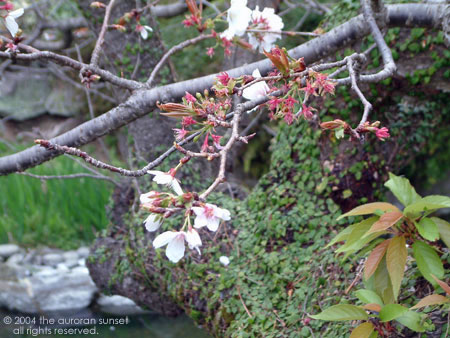 The gardens also have a few small shrines hidden away in the corners, including one dedicated to cats. Inside the shrine is a message board where cat-lovers hang up a message written on a little wooden plaque. The one at the top of this picture wishes that their four cats - Peach, Melon, Satsuma and Apple - will forever remain healthily by their side. All the ones I read were something like this one. 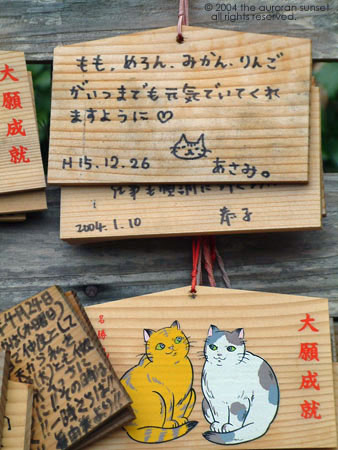 The cat shrine was set up by the 17th Shimadzu lord, Yoshihiro, in the 16th century. Legend goes that he took his seven cats with him on one of Japan’s invasion attempts, and used the size of their pupils to tell the time of day. Thus it is that the shrine’s big ceremony is on June 10th - Time Day (Toki-no-kinenbi). Apparently two of the cats made it back and are ‘enshrined’ there.

other things you might find pretty
the abelard.org art gallery
architectural items at www.abelard.org

the web address for the article above is
https://www.abelard.org/news/pretty14.php

iso gardens / sengan-en | only when it's pretty news at abelard.org